The Road to Self or Indie Publishing Part 2

The phrase self-publishing has a lot of baggage which is why more and more writers refer to it as Indie, or Independent publishing. We’re putting ourselves into the same category as independent film makers. It means we don’t have huge corporations footing the bill. We have to do more on less. We have to work harder to prove ourselves. We have to write well enough to capture readers without the backing of a large company.

As I said in part one, I shelved plans to self-publish because I’d SOLD! I was too busy basking in my success to think about taking the much maligned path of publishing my own works. I was a bonafide author, an editor and publishing company in New York thought so. And best of all, I had an agent who would help me make more sales.

It would take me five years to realize success wasn’t guaranteed because you had a contract and agent. Nor was it guaranteed if you poured your heart and soul and advances into promotion or into writing more stories.

Orphaned, Cancelled, New Editor
I learned all about being orphaned, my line being cancelled, and a new editor’s need to build her own stable of writers before the ink was dry on my contracts. The editor who loved my books left within a few months of making the “call.” Shortly afterward, the new editor told me the company had cancelled the line where my books were slotted. Instead of a year wait for publication, my books were tacked onto another historical line. The year stretched into two.

I finished my second manuscript anyway and had two completed manuscripts in the editor’s hands within two months. I learned that being on time with your manuscripts can get you pushed up in the publishing schedule when another author doesn’t meet her schedule. My two years became fourteen months.

For fourteen months, I worked on my option book and planned my promotion strategies. This was the world of traditional publishing but I wasn’t a VIP. The publishing company didn’t do anything for me except send me a box of extra covers. I designed the website, book marks, sell sheets, postcards, and flyers. I booked myself on local television, did workshops for every age from kindergarten to college at every venue from schools to national writers’ conferences. I did book signings at bookstores and libraries.

Debut Author Euphoria
I was on top of the world. I had gotten two books published and I had an agent.

Then the new editor squashed my option book. According to my agent, the editor said series didn’t sell. The cancelled line had been a historical romance series line. Its collapsed probably influenced her remark. Later, in discussion forums with fellow authors of that publishing company, I realized she was cleaning house, intent on establishing herself with her own stable of writers.

Not to worry, I had an agent to help me sell now. We got along well and she started submitting manuscript proposals. She took them to a lot of publishers. I have to admit, she got me rejected at more houses in a shorter period of time than I ever had. And as usual, the rejections were usually nice with comments such as, “This one doesn’t quite work for me, but I like her writing and will be happy to review future submissions.”

Euphoria Fades Before Reality
Getting a proposal past my agent became more difficult until I realized she was strangling me. I had put yet another person between me and publication. If she didn’t like my project, she nixed it, destroying my passion for whatever I had submitted to her. I felt like a pinball machine as I pinged from one project to another, trying to figure out what she thought would sell.

Those she liked she wanted me to rework. And I did as she asked because she was my agent. She had 20+ years as an editor at several big name publishers under her belt. I was lucky she’d chosen me.

All too easily I had fallen into the typical writer’s trap of being too in awe of a New York agent to realize she wasn’t good for my writing. It wasn’t an equal partnership because I let her steer my career instead of taking charge of it as I should have.

Four years later we parted ways on an amiable basis. One month after we parted ways, I sold two manuscripts to two different small publishing houses. Within a year I had two books out in ebook and print editions.

Unwittingly, I had joined the ebook revolution.

Yep, there’s more as this journey continues in the next blog.
Posted by Ginger Hanson at 11:37 AM No comments:

A Dash of Ginger Goes Live! 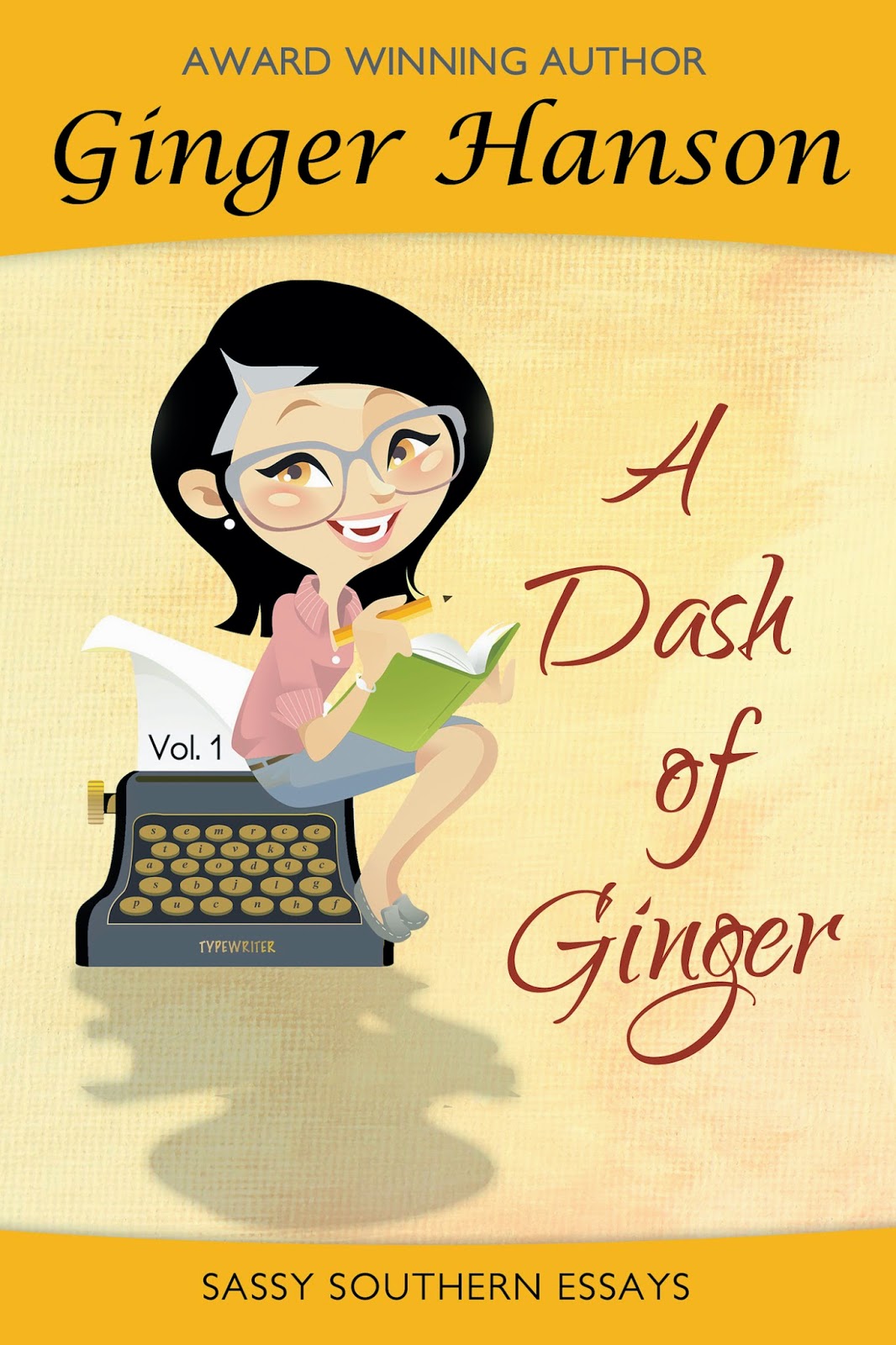 Before I continue on the journey to indie publishing, my first ebook has hit the Internet book stores. I'll be writing more about A Dash of Ginger, Sassy Southern Essays as my journey continues, but for now, here's the cover–which I love!
Posted by Ginger Hanson at 5:04 PM No comments: