Title Control: Coming up with a Title for Your Story

I hope you enjoyed my Story Steps series. I’ve decided to wander back into writing more randomly about writing. If that makes sense? The idea behind the Story Steps was to help you get started with a project. Now I’m going to return to random topics that I hope you will find helpful.

As usual, I had a little more to say about my experience with story titles than in my Story Step 6 blog. Disclaimer: I’m not the world’s best title maker upper. Although I am proud of several of my titles, they are usually hard fought battles as I try to find the one that best reflects the story I’m telling.

In Story Step 6, I wrote about choosing a title for your work in progress. My advice being that if you’re struggling with a title, don’t let that sidetrack you from writing the story. It’s not uncommon for traditional publishers, as I also mentioned, to change the title of a contracted book if they don’t like your title.

My thoughts wandered back this way because the rights to a short story reverted to me last month. The editors had retitled it when they published it. I didn’t care for the title and it even got pinged in a review, justifiably so. Most readers, and I guess many reviewers because they are readers, don’t realize an author doesn’t have control over elements such as title or cover with traditional publishers. Especially with early books.

When I was writing Ransom’s Bride, a Victorian era novel, I titled it Champion’s Bride. Then one of my valuable beta readers told me it sounded like a horse’s name. Oh dear! I dropkicked that title out the door, choosing to use the hero’s first name instead of his last. It was a good move because the editor who bought the manuscript kept the title.

That isn’t always the case.

If you’re new to the crazy world of writing, keep in mind that traditional publishers aren’t always on the mark with titles. It broke my heart when the editor, without any input from me, retitled my first book Tennessee Waltz.

I felt like Tom Hanks’s character in a League of Their Own and wanted to say “There’s no waltzing in this book!” The title seemed downright cruel because the heroine was lamed by a fall from a horse when she was a young girl. There was no dancing in her life.

I called the editor and told her why I thought that wasn’t a good title choice. Especially since Kensington already had a book by that name in their catalog! She told me to come up with other titles and she’d see if it could be changed.

I brain stormed with my agent, we sent a list, but no, it was too late. The covers were already made. To avoid confusion, they removed the other author’s book from their catalog. I always felt guilty about spurring them to take that action, but the book was about 6 years old and probably out-of-print. (The Good Ole Days!)

Way back when I began writing the story, I titled it Destiny’s Revenge. As the story took shape, I realized the word revenge probably didn’t belong in a romance. I retitled the story Destiny’s Angel, but then decided I liked D’Angelo’s Destiny better. I think it was a good title because under that guise, the manuscript won the Historical Romance Category as well as Best in Show in Authorlink’s New Author’s Competition. I was treated to a cash award and a free conference at the Harriette Austin Writers’ Conference at the University of Georgia.

When I got the rights back to this book and decided to Indie publish it, the first thing I did was change the title.The book revolves around different people stealing a horse named Destiny and finally the perfect title popped into my head: Stealing Destiny. 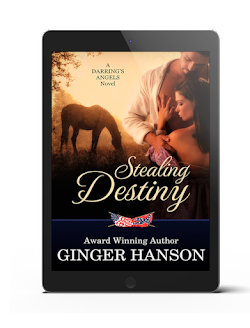 This title feels right. It fits the story better than the title of a country song about a woman losing her honeybun to another. Just remember, you wrote the story, you know it better than anyone else. It may take awhile, but if you follow Goldilocks’ lead and try different titles out, you’ll eventually find the title that’s “just right.”

Posted by Ginger Hanson at 1:05 PM No comments: