Sierra showed up at our small local airport, a starving, flea and tick infested Beagle. No microchip, no tags, she became an immediate addition to the family. She was an anomaly in the Beagle family because she seldom barked. From all accounts, barking is a perennial Beagle issue.

She arrived with some additional baggage, she didn’t run to the door when we arrived home. This is a major dog duty and we resorted to bribing Sierra into acceptable dog-at-the-door behavior. We kept treats in the garage to reward her when we opened the door. My husband even came up with a “Sierra’s happy we’re home” dance. 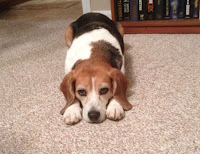 Just as I build a backstory for my rescued pets, I build a backstory for my characters. When I first started writing, I followed the school of thought that mandated each character should have a complete biography prior to writing the story. I wrote pages and pages about each character, where they were born, where they went to school, who their best friends were, their favorite foods, their physical appearance, etc. You name it, I wrote it down. And then promptly, forgot all the information while I was writing the story.

Over the years, I realized I came to know my characters best when I lived with them and got to know them, just as I do with my pets. It’s impossible to know everything about anyone all at once. What we know about our friends, our siblings, our relatives, acquaintances, or our pets, we learn gradually. Sure, we get the physical stuff the first time we see them. We know how tall they are, the color of their eyes, their weight, whether not they have bad breath, wash their clothes, or dye their hair. We know their exterior, but we don’t know their interior.

Based on their exterior, we draw instant judgments because first impressions weigh heavily in our biological background. It’s what warns us whether we should run or stay. We all have stories about a poor first impression we’ve made on someone else. And stories of people mistaking something about us based on a first impression we created.

Posted by Ginger Hanson at 1:35 PM No comments: