Clean Up Your Manuscript! The Road to Self or Indie Publishing Part 6

Making an e-book is a multi-step process that starts with a completed manuscript and ends with an e-book distributors will accept into their stores. To reach the goal of producing an e-book acceptable to distributors, the manuscript needs to be converted from its word processing format into either an EPUB or MOBI format. There are several conversion software programs that will make this transformation. As any Internet search will reveal, the route taken to achieve that end varies widely.

In this blog, I’m going to describe the route I designed. To my delight, it’s gifted me with the successful distribution of five EPBU/MOBI books to four major retail outlets. And it all starts with clean copy.

Garbage in, garbage out, is a popular computer adage. It is especially true with e-book publishing. An e-book conversion program can only produce a well-formatted e-book if it starts with a well-formatted manuscript.

In this blog, I’ll discuss the process I use to produce an EPUB or MOBI which are the formats required for publication via iBooks, Barnes and Noble, Kobo, Kindle, and other distributors. (I have a free e-book at my website (www.gingerhanson.com under For Writers) called Pages to PDF E-Book, How to Make a PDF E-Book Using Mac Friendly Software for those of you who use Macs and want to know how to make a PDF e-book.)

At this point in the writing process, I have to change hats from writer to publisher. I’m
no longer concerned with the story. It’s been written, content edited, copyedited, and proofread. Now I have to begin the process that will end in a product ready for distribution.

Please remember, I publish essay books, short stories, novellas, and novels. I have no idea how to produce a children’s picture book or a book of poetry or anything else. While  the Apple iBooks version contains web links, that’s about as fancy as I get.

All the stories I’ve turned into e-books began their journey in Mac word processing format, specifically Pages (or even AppleWorks!). Obviously, I’m a Mac person and use the following Mac friendly software to create an EPUB or MOBI formatted e-book:

Don’t despair! Their equivalents exist in the PC world. A little research should net you similar programs that do the same thing. Here’s what they do.

Microsoft’s Word for Mac and the PC version software should work much the same. They are a basic word processing program. TextMate is an editing program dedicated to editing. Just look for a strong editing tool. I found this one recommended several times while researching how to make an e-book.

Storyist is dedicated to Macs, but there is a similar program called Scrivener that is Mac and Windows based. It also exports into EPUBs and MOBI formats just as Storyist does. While I have not used Scrivener, starting with a clean copy of your finished manuscript will probably net you the same results I get with Storyist.

As I mentioned in Part 3 of this series, my first manuscript submitted for e-book format was a formatting ordeal for the editor. A Regency historical adventure romance, Lady Runaway was 100,000 words written with two versions of Mac word processing software programs and then pasted into Word for Mac.

Why would it be messy? Because each word processing program has its own set of computer commands for various activities. Lady Runaway was chock full of commands from three programs. A lot of behind-the-scenes information filled each page of my manuscript. Information about spacing, lines, character, font, tabs, margins, headers, footers. Ad nauseam.

Commands from each program stuck like glue to the various versions of the manuscript  I updated, cut, and pasted into the document during the months I was writing the book.

Of course, I didn’t know this. I’m first and foremost a writer. My word processing software helps me write. That’s the reason for its existence. While it’s possible to publish a Word or Pages document, countless hours of research make me believe it’s not the best route to take for cleanly formatted e-book. The underlying commands in any word processing software follow the document and can create havoc in the finished EPUB product.

An EPUB or MOBI book is written in a form of computer language called HypeText Markup Language or HTML. This language runs the word processing program, keeping the font, the margins, etc. the same in a document in addition to the visible written words. It’s sort of a language behind a language.

Given the right commands, HTML also allows text flow to adjust to the size of the e-reader screen. Since the typical word processing programs isn’t designed to flow, the manuscript has to be converted into this type of computer language. To prevent problems in the conversion process, it’s important to provide a clean word processing manuscript.

Which is why it’s a good idea to clean up a manuscript before running it through conversion software.

After cleaning up several manuscripts for digital publication, I learned some of the pitfalls found in word processing software that don’t translate well into the e-book format. This is easier to comprehend if you think of HTML as a foreign language. Anyone who has learned more than one language knows there some words just don’t quite translate accurately into the second language.

For an example, let’s look at a title translation of my second book (which I’m going to retitle and have a much prettier cover made by next year!) This is the U.S. edition of Ransom’s Bride. 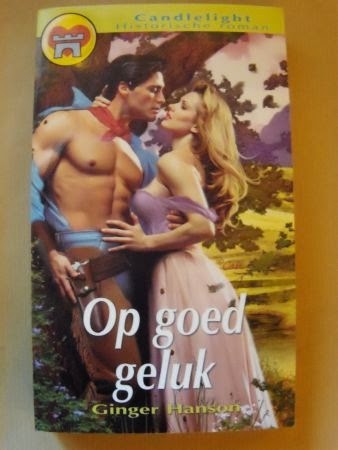 Obviously, the translator didn’t read the book because a Dutch friend said the title is an idiom which roughly translates as, “On Good Luck!” For whatever reason, my title didn’t work well in Dutch. (We won’t even get into the incorrect attire of the models!) Had I known they were going to sell the book to the Dutch market and this would be the result, I would have found an alternative English title that translated more readily into Dutch.

Back to HTML, if something doesn’t translate well from word processing language into HTML language, it’s probably better to not use it in the first place. (And please remember, this whole blog series is written for those of us who aren’t programmers or HTML literates who can manipulate HTML to do whatever we want it to do!)
For example, colons, semi-colons, ampersands, percent signs, parentheses, brackets, braces, backward slashes, and forward slashes don’t translate into HTML very well. To better demonstrate what I mean, you may have seen text online or in email that goes something like this:
Jones &#38; Smith is a real estate company.
The person who wrote the sentence didn’t write &#38. The writer wrote Jones & Smith in her word processing program. When she copied and pasted it into the email program, it still probably looked okay. It wasn’t until the email program sent it out via HTML that things were lost in translation because &#38 is HTML for ampersand. Which is why it behooves the writer whose goal is to publish EPUBs  to wean themselves away from using these symbols. (PDFs are a different ball of wax.)
While it takes time to stop using these symbols, it saves time when cleaning up a manuscript. If these symbols are present in the final manuscript, they have to be removed or the author risks having HTML phrases scattered through their story. Plus, remember you have to revise the content to reflect the removal of those symbols.

For example, if you remove a colon, you’ll need to assess the paragraph and figure out how to say what you want to say without the colon. I did a lot of revision while creating my recent e-book on using dialogue, She Sat, He Stood, What Do Your Characters Do While They Talk? When I gave it as an online workshop, I used all sorts of symbols that don't translate well into HTML. Thus, they had to go for the e-book version.

In this blog, I’ve begun the process of cleaning up a word processing document for conversion into an EPUB or MOBI format. Next time, I’ll wind up the discussion on creating a manuscript ready for conversion.

Posted by Ginger Hanson at 11:57 AM No comments: